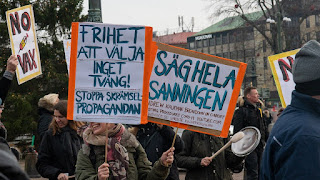 Dr. Heiko Schöning, vice-president of the World Freedom Alliance, addressing the crowds in Stockholm at "Tusenmannamarschen", an anti-Corona-protest, 6 March 2021

Attention, attention, the virus of freedom spreads all over Sweden! May I introduce myself; my name is Heiko Schöning. I am a medical doctor from Hamburg, Germany. I grew up in Lübeck by the Baltic Sea, so yes, I have a great relationship with the Scandinavians. Its good to be here and see so many healthy people, not in a lock-down and still healthy!

I want to address the facts first. I'm a scientist, I'm a medical doctor, and I can tell you straight: what we see with covid-19, world-wide, is organized crime. This is organized crime. And think of all the lies of wars before, like the Vietnam war, with the gulf of Tonkin. Like in the second World War, even there the Germans started it with a lie, and with Iraq and so on. These were lies. Lies in a world-wide fashion are going on! It is not new and this is organized crime! And for all my colleagues, my medical doctor colleagues and all the people who are fact-based, look at this: there is a company called Emergent BioSolutions. This is the company that iproducing, today, corona vaccine. This is the same company that, 20 years ago, produced vaccine against anthrax. An employee of this US-based company, Emergent BioSolutions, former name BioPort, his name was Dr. Bruce Ivins. Dr. Bruce Ivins is the official perpetrator of the anthrax attacks of 2001. And this created a world-wide panic like corona. There was ‘corona-corona-corona’ and 20 years ago it was ‘anthrax-anthrax-anthrax’. This was a lie. The anthrax attacks were based by the US military, the anthrax came from the US army! This is proven!

[Addresses the crowd: and this a good idea, to move around a little bit, to stay in motion]

I can tell you from Emergent BioSolutions, this criminal company, are today producing the corona vaccine is now produced for Europe and an employee, Bruce Ivins, was the perpetrator officially confirmed. Guess why I can tell you it is organized crime! Don’t take this vaccine because vaccination takes 10 years to develop. And now it is developed in one year. Why? Use your common sense, the vaccinations are not safe! Don’t take it! Consider it! It is organized crime what is behind this. And it’s not only because of health. It is just a cover story for the financial crash. 2008 there was a global financial crash, and it was clear who were the perpetrators. The perpetrators were the banks and their private owners! Do you know the Wallenberg family? Yes? Exactly! It was clear who were the perpetrators! But now, more than 10 years later, they have not healed the system from the crash, and they are looking for a cover story. The cover-story is the corona virus, its Covid-19, and you are in it!

And I exposed this in an interview in September 2019. You can look this up at kenfm.de/heiko-schoning. I said this four months before, I predicted that in 2020 there will be this panic with corona! That is not a joke! This is exactly the reason why I was prevented from speaking. They blocked me in Berlin at the first of August [2020]. We had one million people there, but we came back with one and a half million people in Berlin! I was talking, speaking to the people in Berlin, one million people! And I had with me, I had the nephew of John F Kennedy, the US president. We are not the minority. We are the majority!

[…] Police-men, look up what is ‘gladio’. Search for the word gladio and you will see there is state terrorism. It's happened long before. Like in Germany at ’Celler Loch’? This has happened you can look it up. Its organized crime.

Ok, so what is the take-home message? Take home is this: its organized crime. Look in Germany, the ghost towns there, and the lockdown, and the lock-down kills. And it kills not only the economy it kills people – it kills babies! Because like in Australia four babies were killed because they were not allowed to get the medical treatment, because of Covid-19! And I want to address this to the businessmen of Sweden. Align with us – align with the World Freedom Alliance. Because this is your chance to keep your stores open, to keep the social life ongoing. All the workers, join us!

Ok, keep in mind: organized crime, and keep in mind and look up Emergent BioSolutions, former name BioPort. This is the company that is producing the vaccine for Europe, and the former employee Dr. Bruce Ivins was the perpetrator of the anthrax officially. Think twice what is going on here?

Thank you very much indeed, and go on with citizenship, with freedom, and stand together. My name is Heiko Schöning. I'm the vice president of the World Freedom Alliance and you are great. Thank you for being here.

Filip Sjöström [organizer]: Thank you Heiko, this amazing German doctor, who is the biggest freedom fighter we have right now.

[After another talk and some tense encounters between police and protestors, Dr. Schöning again 3]

[31’45’’] So attention attention, we go on with content: You’ve got rights, you have human rights and one of the rights is to speak out. I can tell you why I am doing this, because I am a father and I got two kids and I don’t want them to grow up in a society like this: with ghost towns, with lockdowns with more or less forced vaccinations – we have seen that in Germany bin the 1930s before, and we need to stand up, we need to tell the truth and I can tell you: do everything you can, give in all what you can, donate to the groups and stand up for your rights, and I was arrested in London in September, why? Because I was standing in Hyde Park at Speaker’s Corner and I was talking and this was everything. And I was arrested for nearly two hours, this was awful. They got my mobile phone, my laptop, and it is almost a year ago and I haven’t got it back they have arrested for speaking, to speak out at Speaker’s Corner and what were my last words, I said thank you for the British band Depeche Mode, thank you for the soundtrack of our times. Thank you for the song ‘Where’s the revolution’. And Depeche Mode says. “Where's the revolution? / Come on, people / You're letting me down / You've been pissed on / For too long / Your rights abused / Your views refused – Where's the revolution? / Come on, people / You're letting me down”. And this is peaceful, because all we need to do is to be in peace. Ok, the risks are rising, yes, but the chances too, and we can better, we can do a better normal, we don’t need to do ‘new normal’. The new normal across the globe from the oligarchs. And what do we say to the new normal? [Crowds cries: ‘Fuck you!’] Schöning: Tell me what democracies look like? [Crowd responds: ‘This is what democracies look like!, repeated about ten times]

Posted by Andreas Önnerfors at 14:00